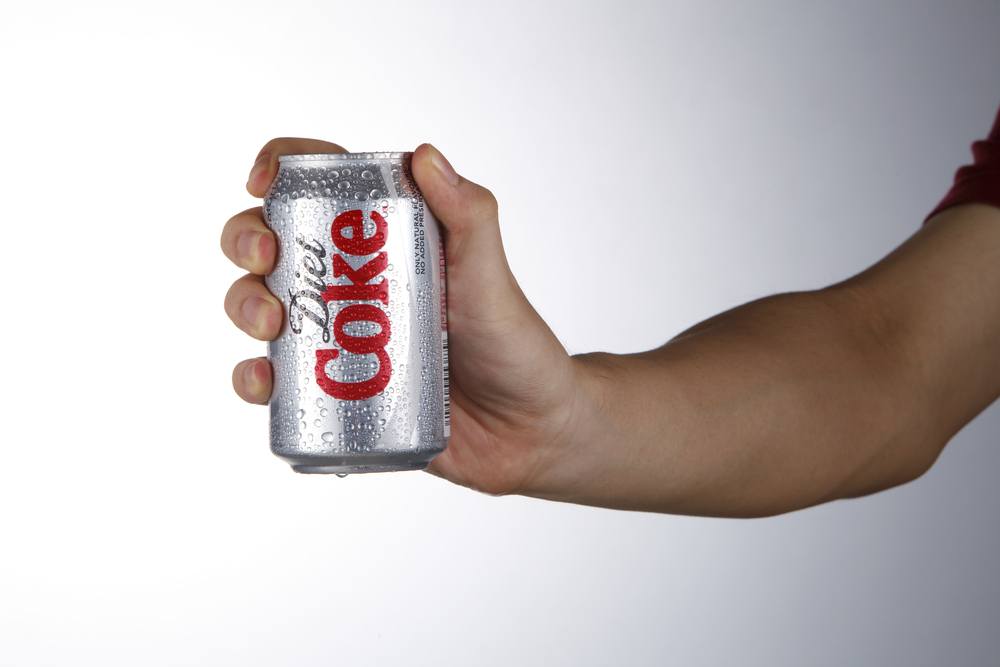 With a diagnosis of diabetes, you have likely looked for “diet” beverages with zero or very few carbs or calories. Some medical professionals recommend diet drinks for people with diabetes, and some warn against them. Can diabetics drink Diet Coke?

People with diabetes can drink Diet Coke, in moderation. The beverage contains no sugar, carbohydrates, fat, or fiber, and is low in calories and sodium. For these reasons, Diet Coke can be included in your diabetes meal plan.

According to Mayo Clinic’s Healthy Lifestyle, Dec 23, 2020, “Drinking A reasonable amount of diet soda a day, such as a cat or two, isn’t likely to hurt you.

The artificial sweeteners and other chemicals currently used in diet soda are safe for most people, and there is no credible evidence that these ingredients cause cancer. “

As you will see further down in the article, you will see that the debate is still out on diet soft drinks and any related health risks.

Read on to explore Diet Coke in detail. I will also compare nutrition values and ingredients between Diet Coke, Coke Zero, and Coke Zero Sugar.

What Is The Difference Between Diet Coke, Coke Zero, and Coke Zero Sugar?

Interestingly, if you look at the nutrition values listed on our products of discussion, you will find:

How are they nutritionally distinguished? They are not.

Aspartame is an artificial sweetener that is 200 times sweeter than sucrose. It is commonly used in foods and beverages. It was first manufactured in 1965, but was not approved by the US Food and Drug Administration (FDA) until 1981.

Asulfame potassium (Ace-K ) is found in many items, including protein drinks, frozen desserts, baked goods, gum, and diet soft drinks. The FDA approved use of this artificial sweetener in 1998.

Potassium citrate is a potassium salt of citric acid. It is an odorless, white, crystalline powder with a “saline” taste. It is added to many beverages, especially diet beverages. Its taste tends to mask some of the acidity of carbonated soda. It is important in soda because artificial sweeteners don’t taste very well on their own.

The first sweetened sodas with no or very little sugar started appearing in the 1950s and early 1960s. Early products included “No-Cal” by Kirsch Bottling, “Diet Rite” by Royal Crown, and a diet drink by Dr. Pepper.

These beverages were marketed to provide refreshments for diabetics, and did not target the general population of dieters. (Historyofsoftdrinks.com)

The first product that was advertised as a “diet” beverage to focus on the population of dieters occurred in 1963. The Coca-Cola company launched a new product. “Tab” was very popular across the United States, and is still sold in many countries around the world. Coca-Cola has focussed much more on diet Coke, which was brought to the market in 1982.

Coke Zero was introduced in the United States in 2005 as a new no-calorie soda. In August 2017, Coca-Cola reports that the product was reformulated, and the name was changed to “Coke Zero Sugar” to be “as clear and descriptive as possible.”

The company did some internal research and discovered that many consumers did not know that Coke Zero was a sugar-free and calorie free cola.

The intention of the reformation was for it to taste more like standard Coca-Cola, as well as emphasize the lack of sugar. Product packaging was also changed to make it look more like the real Coca-Cola.

As you know, the Coca-Cola company has many different varieties of beverages, and its product portfolio includes over 3500 of them. My focus in this article is Diet Coke, as it was the third best selling soft drink in 2018 (most recent data).

Diet Coke falls in third place after classic Coca-Cola in first, and Pepsi cola in second. We will look at products in the Diet Coke line, and see whether it is safe for people with diabetes to drink and how it might affect blood sugar.

The Coca-Cola Company says that its Diet Coke delivers a “unique, distinct, and lighter taste to their classic Coca-Cola.”

These nutrition values and ingredients can and do play a big role in the lives of people who have diabetes. Understanding these will help you decide if they are safe for a person with diabetes to drink.

The energy in food and drink comes from carbohydrates, protein, and fat. Diet Coke has less than 1 calorie and zero grams of the 3 macronutrients, so technically, it provides no energy. When you feel better after drinking your Diet Coke, it is likely that the caffeine is waking you up.

This is great for people who have Type 2 diabetes, are overweight, and might be on a diabetic, calorie-restricted diet (1500-2000 calories per day).

If you are counting calories or carbs, Diet Coke is a freebie. However, Diet Coke is a diuretic, so you may find yourself visiting the restroom more than usual. Be sure to supplement your intake with water. This is a great way to quench your thirst and keep your body well hydrated.

Looking at the nutrition information for fats, carbohydrates, sugars, protein, and fiber, we know that Diet Coke contains none of these. Try to eat a consistent amount of carbohydrates and make sure to include lean proteins and healthful fats.

In 2010, the American heart Association recommended that people who are at risk for heart disease, including all people with type 2 diabetes, further limit their daily sodium intake to 1500 mg.

A goal today is for all people to reduce their sodium intake, and abide to the 1500 mg restriction.

As we can see, Diet Coke only has 40 mL of sodium per 12 ounces (355 mL). This is great news again for people who have diabetes. A person with diabetes would have to drink hundreds of cans of Diet Coke to go over their sodium limit for the day.

Carbonated water contains dissolved carbon dioxide gas, which is either artificial or injected under enormous amounts of pressure. With regards to diabetes, carbonated water will have little effect as it has no caloric value. Hence, people who have diabetes can drink carbonated beverages without worry.

Food color 150d is a water-soluble caramel-brown food coloring. It may cause high blood pressure and cancer in large amounts because it contains 4-MEI and may decrease the immune system’s functionality. These effects don’t specifically relate to diabetes but should be noted.

Furthermore, the amount that Diet Coke contains is negligible, but it is good to know the effects of color 150d. Just remember to not over-do your consumption of color 150d whether you have diabetes or not.

Food acids 338 and 330 are citric acid and phosphoric acid.

Citric acid, found in citrus fruits, provides the “tangy” flavor in sodas, where artificial sweeteners or sugar provides the sweetness. Citric acid, when combined with baking soda, reacts to form the bubbles or carbonation in the soda. This also gives it flavor.

Phosphoric acid, also known as orthophosphoric acid, is a weak acid, It is colorless and odorless, and also gives soda a “tangy” flavor. It also prevents the growth of bacteria and mold, which multiply easily in sugary solutions. Most of the acidity in a soda comes from phosphoric acid.

Sweeteners 950 and 951 are Acesulfame K and Aspartame. Acesulfame K (Ace-K) is calorie and carbohydrate-free, making it a perfect alternative to sugar for people who have diabetes. It is said to be “sugary-like” with a clean taste.

Aspartame is considered safe for people with diabetes. It is around 200 times sweeter than sugar, containing less than four calories per gram. Compared to sugar and carbohydrates, both these sweeteners are a better alternative, especially considering other drinks and juices containing added sugars.

Coca-Cola keeps the recipe for their flavors secret, and as such, we don’t know what they contain. Furthermore, no studies or information has been released, stating that Coca-Cola’s flavor is either good or harmful for diabetics.

Diet Coke contains between three and four times less caffeine than a cup of coffee. Two cups of 8oz coffee contain about 280 mg caffeine, and for most young, healthy adults, caffeine does not appear to affect blood sugar levels, with amounts even going to 400 mg without any effects.

However, people with diabetes may experience fluctuating blood glucose results due to caffeine consumption.

In terms of the caffeine content of Diet Coke, it is relatively safe for most people with diabetes to drink. Just don’t drink a lot, and remember to supplement it with water. If you have any health conditions, including heart disease hypertension (high blood pressure), be sure to consult with your medical provider.

The research on diabetes complications associated with diet soft drink (non-nutritive sweetener) consumption is relatively limited and still up for debate.

Some people are intolerant or opposed to artificially sweetened beverages so a healthier alternative would always be a better choice. When making a decision on what you want to drink, make the diet soft drinks an occasional choice and not your “go to” beverage.

According to The Framingham heart study, which is a long-term ongoing cardiovascular court study of residents of the city of Birmingham Massachusetts that began in 1948, drinking one can per day has been linked to obesity, increases risk of metabolic syndrome, increase his waist size, can impair blood sugar levels, and some people may experience high blood pressure or higher cholesterol levels. These factors may increase your risk for heart disease (Feb 15, 2017).

In conclusion, Diet Coke is relatively safe for people with diabetes in terms of its nutrition values and ingredients. It has no carbohydrates, sugars, fats, or dietary fiber, and uses artificial sweeteners as a sugar substitute. It is low in calories and sodium, which makes it a good beverage for a diabetic to enjoy in moderation.

Eating peanuts is a great way to satisfy hunger when you are reaching for a snack, and they are a nice addition to any snack mix. Yet, the question comes up... Can diabetics eat peanuts? With a...