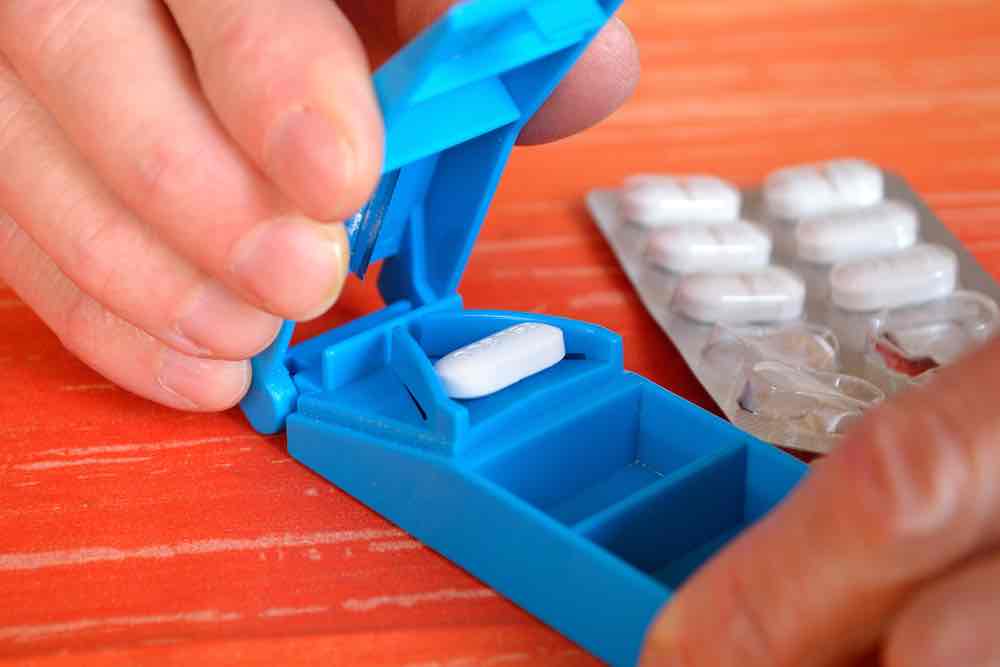 Metformin or Glucophage is a large pill that many people struggle to take. Some people have trouble swallowing, or need smaller doses. Individuals who have had bariatric or stomach surgeries have more successful outcomes if pills are crushed or cut.

Immediate release (IR) Metformin or Glucophage can be crushed or cut without damaging the medication. However, the Metformin extended release (ER) formulas cannot be cut, crushed, or dissolved as it will ruin the active timing release of the medication.

Listed below are the two different forms of Metformin (IR and ER), how the medications work and what happens if you cut, crush or dissolve the medication.

For further information on Metformin or are not quite sure if it is right for you read my in depth article on what is Metformin.

Metformin 500 mg (or other doses), immediate release formula, can be cut, or split without changing the properties of the drug.

I recommend using a pill cutter designed for this task, vs. using a sharp knife. This will assure a clean cut without injury, and you have a better chance of retrieving both halves when the task is complete.

Some medications will have a “score” in the middle, making it easier to divide.

Be sure to use your split tablets sooner than later, to minimize exposure to air and moisture.

Keep all of your medications in the original, airtight, labeled, prescription bottle.

What Happens if you Cut Metformin Extended Release (ER)

Each of the 3 extended release formulas have a different technology or mechanism for releasing the medication. Cutting, crushing or dissolving in water will change the timing of the release of active medication.

The following will explain the technology of Metformin ER and why cutting, crushing or dissolving will damage the pill.

Listed below are the 3 types of extended release Metformin pills and how they work.

Creates a polymer matrix system forming a gel on the surface of the tablet after it comes in contact with fluid after entering the GI tract.  The active drug is then able to diffuse through the gel slowly over an extended period of time. (Source)

Fortamet has a technology where the medication slowly exits through a small hole in the specially designed tablet. This type of tablet has a small hole created by a laser and is more often to leave a Ghost pill in your stool. It has an outer layer that ends up passing through your intestines and into the stool. (Source)

Is There A Liquid Form of Metformin?

Many people that have a hard time swallowing pills often look for something in a liquid form because it is easier to swallow.

A small amount of patients have reported to me that they will notice their Metformin in their stool. Two highly recommended endocrinologists I worked with at St. Luke’s Hospital in Duluth Minnesota (Dr. Robert Sjoberg-now retired and Dr. Derrick Aippolaini) report that this is nothing to worry about. Your medication has been absorbed. It is just the casing of the medication you see.

If you have further questions about your Metformin, or any other medications, contact your pharmacist for assistance.

If you are in need of immediate attention, call your local emergency center.

There is nothing better than a good BBQ feast and all the different sauces that go along with it. Unfortunately, many of us feel like we have to limit ourselves or avoid certain foods all together....

Continue Reading
link to Can I Inject Insulin Through My Clothes? (Infections?)

Maybe you’ve done this at a movie theater or at a local restaurant. It’s quicker and it’s convenient. You just gave yourself an injection of insulin through your T-shirt. Is that okay? Can I...