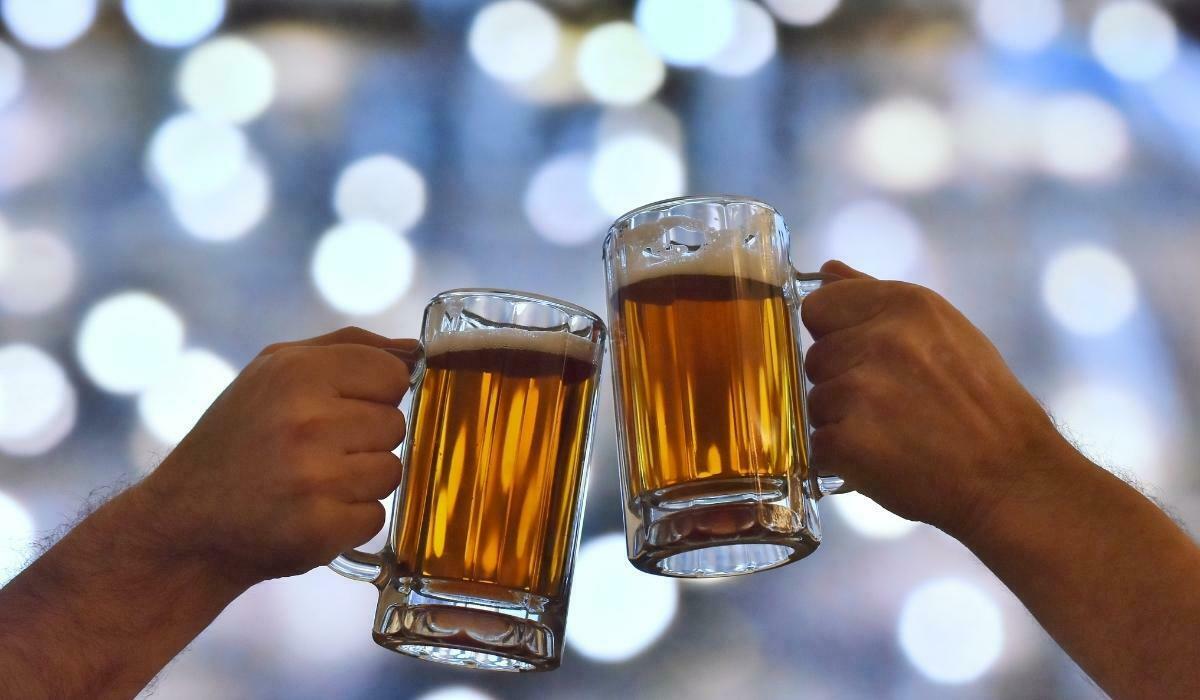 With football season being in full swing and the holidays just around the corner, clinking celebratory pints of brew is in order! But as we know, this comes with a price of adding more calories and carbohydrates to your diet than normal.  While carb-counting is no new thing, tracking sugar intake has been getting increased attention in the healthcare industry.

In short, although beer starts out containing sugars, the end product of regular beer typically contains very little to no sugar. Light beer has more sugar than regular beer and non-alcoholic beer contains the most.

This may leave some confused.  How can beer start out with sugar, but not end with it? To understand this better, let’s chat about the process of beer brewing.

Sugars are a necessary component in brewing beer.  They are also a type of carbohydrate. So, is sugar-counting something we should be keeping a close eye on when consuming beer, especially for those individuals dealing with diabetes?

A basic recipe for beer will contain grains, yeast, spice, and water.  Much of the carbohydrates and sugar in beer come from its malted grains, which is also what gives beer its sweetness.

Malted grains are grains, like wheat and barley, that have been germinated and dried.  This process creates enzymes that convert the starch in the grains into sugars, mainly maltose.

But, if beer contains the sugar maltose, why won’t it be found in the ingredients list on beer labels?  It has to do with the process of fermentation.  The sugars go through a  mashing process to create a sugary liquid called wort.

Yeast is then added to the wort, which ferments sugars to produce alcohol. By the end of the fermentation step, the beer should contain little to no remaining sugars, as they should be fermented entirely by yeast into alcohol.

While the general outcome for regular beer is virtually sugar-free, not all beers are created equal when it comes to sugar and carb content.  Oftentimes if a beer contains sugars, they come from added sugars, such as lactose, honey, or syrups.

Ultimately, the sugar content of beer depends on the product, its fermentation process, and any added ingredients.

How much sugar is in beer?

As mentioned above, regular beer tends to be free of sugar or have very little sugar in it. The same goes for light beer, typically containing one gram or less per 12 ounce can.

However, one type of beer contains the highest sugar content of all.  Non-alcoholic beer can have anywhere between 4 to 28 grams of sugar per 12 ounce can.

What makes non-alcoholic beer so sugary? Again, it goes back to its brewing process, but first let’s start at the very basics of carbohydrates.

There are three types of carbohydrates – sugar, starch, and fiber. Much of the sugar in non-alcoholic beer comes from maltose found in malted grains.  Since non-alcoholic beers go through a shorter fermentation step (the process of turning sugar into alcohol using yeast), sugar is more likely to survive the brewing process.

How much sugar is too much?

If you are interested in keeping track of your sugar intake when consuming beer, it is useful to know the recommended daily limits of sugar. While this isn’t something you need to worry about when drinking regular or light beers, non-alcoholic beers are higher in sugar and can quickly mount up your sugar intake.

The NHS recommends adults don’t consume more than 30 grams of sugar per day. This means just one pint of most non-alcoholic beers can account for the majority of your daily allowance of sugar.

If regular beer and light beer are brewed the same way, what makes them different? Labels of light beers will often refer to a lower number of calories, alcohol, and carbohydrates versus its regular variation.

Although you will get a cut in carbohydrates with light beers, this often means more sugar, albeit not much more. Below is the general amount of carbs and sugars in 12 ounces of popular beer brands:

As with anything, to truly understand what makes your light beer “light,” it is always important to read a product’s label.

Does beer affect your blood sugar?

One would assume that if you consume a high carbohydrate beverage, like regular beer, or a high sugary beverage, like non-alcoholic beer, you might expect a spike in your blood sugar levels.

However, the human body metabolizes sugar and carbohydrates differently when alcohol is present. While carbohydrate-rich and sugary foods generally increase glucose levels, alcohol has the opposite effect.

Normally, between meals and during sleep, the liver makes new glucose (sugar), which is then sent to the bloodstream to regulate blood sugar levels.  The liver also filters out toxins, like alcohol and drugs.

When you consume alcohol, these two factors compete against each other, and your liver begins prioritizing filtering out alcohol over balancing blood sugars.  This can lead to severely low blood sugar within 24 hours of drinking, which is especially crucial for individuals with diabetes.

In general, it is safe for people with diabetes to drink beer in moderate amounts.  Safe drinking limits for women is one 12-oz can of beer per day, and two 12-oz cans of per day for men.

It is important to know hypoglycemia can mimic the effects of alcohol.  Some symptoms of low blood sugar that can easily be mistaken for being drunk include dizziness, light-headedness, confusion, and/or sleepiness.

It’s recommended to speak with your healthcare provider before consuming alcohol when diagnosed with diabetes.

Drinking beer while taking diabetes medication is generally safe; however, it is helpful to be aware of any potential risks.

Here are some possible alcohol-medication interactions with common diabetes medications:

Other signs of a compromised interaction between alcohol and diabetes medication include symptoms of lightheadedness, having trouble keeping balance, and/or an upset stomach.

It is recommended to talk to your healthcare provider before drinking alcohol while taking any type of diabetes medication. This can help prevent potentially serious side effects from occurring.

When to avoid alcohol as a diabetic

Drinking in moderation normally won’t cause an issue; however, there are times when a person with diabetes may want to avoid alcohol altogether.

Alcohol can affect each person differently, and while hypoglycemia (low blood sugar) is the most common concern for diabetics consuming alcohol, there may be other reasons to limit or avoid alcohol completely.

Be cautious of consuming alcohol if you have any of the conditions below, as drinking can make them worse:

In addition, beer contains calories and when drunk in excess can lead to belly fat.  An increase in belly fat (aka a beer belly) contributes to several health problems including heart disease, high blood pressure, and liver disease – all of which people who have diabetes are already at risk for.

While paying close attention to what you drink, how you drink plays a part too.  Here are some tips to avoid the possible dangers of drinking when you have diabetes:

Checking the nutrition information of your favorite beer proves to be a little challenging.  Beer makers generally do not provide this information on the packaging or bottles/cans.  But in most cases, you can look online on either the beer maker’s site, the U.S. Department of Agriculture or nutrition data site.

Generally, one can of beer (about 12 ounces) contains:

Beer isn’t all just calories and carbs! It also contains small amounts of potassium, calcium, thiamine, iron, and zinc.  The B vitamins and minerals found in beer come from the grains and yeast needed during the brewing process.

Although beer contains small amounts of these micronutrients, it is not a good source compared with whole foods like fruits and vegetables.

Sugar is a necessary ingredient in brewing beer, as it is what yeast uses to make alcohol.  While there are some factors that influence this process, yeast is highly efficient at converting most sugar into alcohol.

So, fortunately for a sugar-conscious individuals, beer makes for a low-sugar beverage, with the exception of non-alcoholic beers.  While the sugar content in beer will not affect diabetics, the amount of alcohol you consume could.  Drinking beer in moderation as a person with diabetes is generally safe.

However, always keep in mind that alcoholic beverages may lower your blood sugar levels, among other side effects. Speaking with your healthcare professional and monitoring your alcohol intake is recommended.

For individuals who follow a carb counting meal plan, you may be inclined to count a can of regular beer as 1 carb choice 1 carb choice = 15 g carb), I advise you not to count the carbohydrate grams from your beer due to the effect of the alcohol on your blood sugars.

Blood Sugar and Beer — A Diabetes-Friendly Guide to Drinking (brook.health)

How Much Sugar Is in Beer? (healthline.com)

Can I Drink Alcohol If I Have Diabetes? – GoodRx

Thanks for stopping by my Dealing With Diabetes blog! My name is LeeAnna.

link to Can Diabetics Eat Popcorn?

Continue Reading
link to Why Do Diabetics Pee So Much?

Have you recently been diagnosed with diabetes? Do you feel like you always have to urinate? You frequent the toilet many times at night and you are always seeking the restrooms when you are out in...

Thanks for stopping by my Dealing With Diabetes and Nutrition blog! My name is LeeAnna. I am a registered dietitian and certified as a diabetes care and education specialist (formally known as a certified diabetes educator). My goal is to answer questions you may have about diabetes, dealing with diabetes and nutrition. Mixed messages are everywhere. Hopefully, this blog will help clarify some of the confusion!